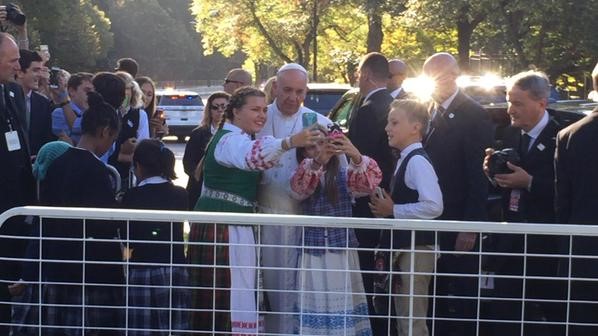 If you’ve turned on a television or gone online in the past week, you know that Pope Francis is in the United States. As this is his first trip to the U.S., the media and country alike are overjoyed to host the Pope during his visit. Since arriving, Pope Francis has met with President Obama, spoken before Congress and will meet with the United Nations today.

Through his philanthropy, inter-faith outreach and even social media, the “People’s Pope” has already made a huge impact on the world. His connection with the people has only been strengthened by this trip.

With over 23 million Twitter followers, he is currently the most retweeted leader in the world. Known to be straightforward with the general public on Twitter, Pope Francis has helped shape a humble, more accessible and service-oriented image for the Catholic Church. His ability to connect and understand creates a mixture of leadership, engagement and strategy, all important factors for engaging with an audience.

Here are three ways to improve your communication tactics based on Pope Francis’s social strategy via Crenshaw Communications:

Whether your beliefs align with his or not, there are many communication tips to be learned from Pope Francis. He is changing the way world leaders communicate with their audience – the world. 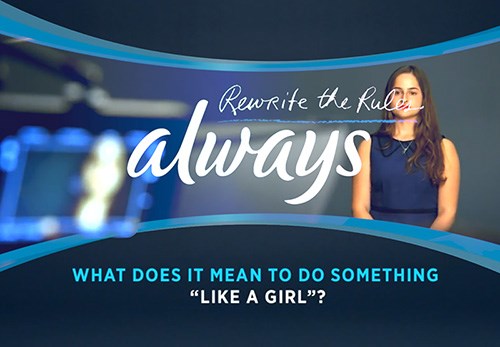 After all of the results were announced at the 2015 Cannes Lion Festival last week, people noticed a trend in the winning campaigns – advertisements with empowering messages brought home the most prestigious awards.

The Cannes Lion Festival, a global awards ceremony held for top professionals in the creative communications and advertising industry, had a spike in the number of awards given to the campaigns with a powerful message.

There are over 18 different advertising and media related categories and a top prize, the Grand Prix award, awarded to one campaign in each group. In the PR category, the #LikeAGirl campaign for feminine care brand Always created by ad agency Leo Burnett transformed the negative term “like a girl” into a strong message for women. #LikeAGirl won the award over 1,969 other entries in the PR category.

Other highlights included the LifePaint campaign for Volvo created by ad agency Grey London, Lucky Iron Fish by agency Geometric Global, I Will What I Want for Under Armour created by Droga5 and Red Light App for Vodafone by Y&R Team Red Istanbul which all received a Grand Prix award, the highest honor of the ceremony.

Many of the winning campaigns promoted topics like women empowerment, awareness of various issues such as iron deficiency in Cambodia and safety. According to USA Today, many of these campaigns have made a positive impact towards their cause. The Lucky Fish project for example was proven to have improved the overall iron intake of Cambodians, who are prone to iron deficiency leading to diseases like anemia.

Although the 2015 Cannes Lion Festival has awarded many other campaigns for being innovative and original, the creative communications with the most powerful messages were clearly the most successful in their efforts. Will heartwarming and empowering become the next big thing for PR and advertising? 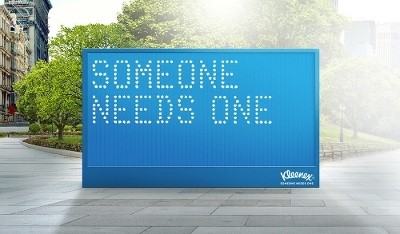 Kleenex® just launched “Time for a Change” a new, touching television ad campaign that is spreading thoughtful positive action across the nation. According to an AdAge article, the campaign features people coming to others’ rescue in emotional distress with the tagline “Someone Needs One.” The video shows a boy giving a girl a Kleenex® because she is crying, reassuring her “people think boys are loud and immature and don’t care about feelings, but they’re wrong.”

“This ad draws on insight from a survey that showed 50% of people in the United States say they’ve missed an opportunity to show someone they cared,” said Eric Higgs, general manager of Kleenex® Brand. “Here’s a brand designed to provide care and uplift.” Kleenex® is continuing the trend of contagious kindness with this ad, similar to video ads launched in February to encourage sharing pocket packs with those in need.

“I don’t think care is ever going out of style,” said Higgs. “I think this has the potential to be the spark that makes caring contagious.”

Kleenex® is going further than television ads with the “Someone Needs One” campaign. On Kleenex®’s website, people can also now share a message of care by creating and sending a personal Kleenex® Careboard message spelled with the soft touch of Kleenex® tissues. Kleenex® “will be demonstrating the importance of timely care through a multi-platform commercial program including documentary-style videos featuring compelling, real-life stories of people showing meaningful gestures of care throughout the U.S.”

The broader campaign includes a partnership with Facebook to target video ads based on users’ demographics, stated interests and time of day. The videos capture people’s real-life moments of care and show that the simplest actions at the right time can be the most touching.

Kleenex®’s new ad campaign is helping contagious kindness go viral as well as testing how effective kindness can really be in advertising.

The third annual Giving Tuesday, a movement that takes place after Black Friday and Cyber Monday, took place this past Tuesday on December 2, 2014. The day was designated to remind Americans that generosity of the holiday season should extend beyond friends and family and give back to the community. Last year, Giving Tuesday raised $19.2 million and had over 10,000 nonprofits worldwide participating in this global day dedicated to giving back.

This year, 68 countries and over 15,000 nonprofits participated in Giving Tuesday, increasing donations by nearly 63% since last year. An estimated $45.68 million was donated to charities across the globe. Part of the success of spreading the word on Giving Tuesday was due to the help of social media. Charities, families, businesses, community centers and students around the world were encouraged to share their stories of how they celebrate generosity and give back to their communities with the hashtag #GivingTuesday, inspiring others to do the same. This Giving Tuesday alone, #GivingTuesday had 698,600 hashtag mentions and 32.7 million Twitter impressions.

Beyond Giving Tuesday, there are companies who provide an easy way for consumers to give back year-round. GIV Mobile, the first no-contract consumer conscious wireless service, was proud to participate on this day and every other day of the year by donating 8% of every customer’s monthly bill amount to up to three nonprofit charities of his or her choice. Some of these charities include Scholarship America, Kids In Need Foundation, The Conservation Fund, Alzheimer’s Association and many more.

Although Giving Tuesday has past, don’t forget there is still plenty of time to help out your favorite cause this year! J

Find out more information on Giving Tuesday on their website: http://www.givingtuesday.org/

Ten years after the launch of Dove’s Campaign for Real Beauty, another retailer is using “realistic” models in its new advertising campaign. American Eagle’s lingerie/loungewear brand Aerie has recently launched the Aerie Real campaign. None of the photos used within the campaign have been photoshopped or airbrushed, making the images more relatable to the average female shopping for intimates. Tattoos, stretch marks and imperfections remain on the women featured wearing the new clothing line, and so far it has received praise from females across the country. Aerie’s bold move may be a step in the new direction of marketing: advertising to the average consumer.

For more information about the launch of Aerie Real, read the full article from Ad Week: http://www.adweek.com/adfreak/aerie-launches-simple-revolutionary-lingerie-ads-beautiful-models-and-no-photoshop-155088

Or watch the clip from Good Morning America:

With Thanksgiving coming up this Thursday, MealSharing.com, a website that connects travelers and locals over home cooked meals, has created “ThanksSharing” for people who can’t be with their families this Thanksgiving.

Perfect for anyone who can’t make it home for the Holiday, MealSharing.com is connecting these people with a host who need a place to enjoy a home cooked meal this Thursday.

To find a meal, guests can log on the website, review a host’s meal profile and request a meal. If the host accepts, the two parties may then message back and until the meal is set. Hosts can accommodate one or many guests per meal. Afterwards, users and hosts review their experience.

Meal Sharing plans to make ThanksSharing an annual tradition with hopes that no one will eat alone on the popular American holiday. To join the MealSharing.com community and host a ThanksSharing meal, please visit http://www.mealsharing.com/thanksgiving.