After Rolling Stone magazine released its August cover featuring Boston bombing suspect Dzhokhar Tsarnaev, the legendary magazine was met with a storm of backlash. Retailers are boycotting the issue and musicians are expressing their distaste, while social media is overflowing with outcry. 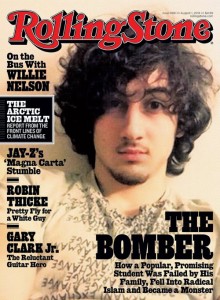 The cover of Rolling Stone magazine has long been a determining factor if a musician has achieved pop icon status. Alongside its commentary of the music industry, the magazine also has a tradition of serious reporting on the current cultural landscape. However, it isn’t an article about Dzhokhar Tsarnaev’s descent into radical Islam that is offending people, its Tsarnaev’s rock star looking cover photo.

This situation is similar to when the magazine put Charles Manson on the cover in 1970. Manson is arguably one of the most famous American criminals in the world, and his story has amassed many followers and admirers even after years in prison. The cover photograph, originally self-posted on Tsarnaev’s  twitter page, is eerily similar to past cover photos of stars like Jim Morrison, Madonna, Billy Joe and Paul Getty.celebrity

A large part of the national conversation surrounding the Boston Bombings and recent crimes of that nature was the amount of media attention that was paid to the criminals, giving them celebrity status. Putting an alleged terrorist on the cover of a magazine that turns musicians into icons is troubling when considering how it will affect peoples’ perceptions of fame.

“The cover story we are publishing this week falls within the traditions of journalism and Rolling Stone’s long-standing commitment to serious and thoughtful coverage of the most important political and cultural issues of our day,” continued the statement. “The fact that Tsarnaev is young, and in the same age group as many of our readers, makes it all the more important for us to examine the complexities of this issue.”

While the backlash is at an astounding level, some are arguing it won’t affect the magazine long term.

According to a Fox News article, Ronn Torossian, CEO of 5WPR, said the backlash would probably last for a few weeks and will die down by the time the next cover is released.

“Folks like me, who haven’t looked at Rolling Stone in a long time, are reading the issue and once re-acquainted, will probably buy the next one.”