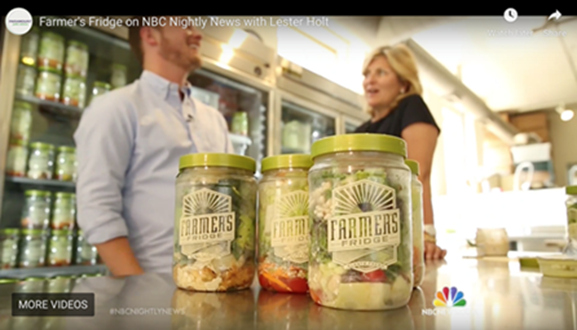 Breaking the Mold on Fast Food

Vending kiosks dispensing restaurant-quality salads and snacks made fresh each morning was virtually unheard of before Farmer’s Fridge debuted, making headlines not only in the United States but also across the globe in countries such as Brazil, France, Spain, Italy and the UK. The Chicago-based company’s mission was to create healthy salads, soups and snacks easily accessible through completely independent and technologically advanced vending kiosks. Placed in high-traffic areas, Farmer’s Fridge’s kiosks targeted anyone who wanted to make a healthier on-the-go meal choice. The PR company recommended a campaign that leveraged their environmentally conscious, unique mason-jar salad packaging as well their donation of day-old salads to a local Chicago food pantry.

Since Farmer’s Fridge was a start-up company with a very limited budget, Paramount Public Relations leveraged media relations to the fullest. The public relations launch of Farmer’s Fridge garnered over 2 billion media impressions, sparked global discussion and challenged the concept of “fast food” today as we know it.

While traveling for his previous job, the founder and CEO of Farmer’s Fridge, realized that healthy eating on-the-go came with a tradeoff. At highway rest areas and common fast food establishments, it was nearly impossible to find healthy, fresh options. While traditional vending machines were commonly associated with candy bars and quarters, Farmer’s Fridge’s refrigerated high-tech, touch-screen and credit-card-only kiosk seemed to fall in its own category.

The objective was to successfully launch a targeted public relations campaign for Farmer’s Fridge and the goals included:

In addition to the kiosk locations, Farmer’s Fridge also offered catering across the Chicagoland area to local businesses. Before the official launch, the team targeted mid-size companies in the Chicago Loop that were not only located near the kiosk but also corporations that could potentially become catering customers. Not only did this help test the product but also grew organic, local buzz around the concept, especially on social media. After the catering initiative, the PR team then moved on to media drops at top Chicago media outlets.

For the official launch of Famer’s Fridge, Paramount Public Relations distributed the launch press release over PR Newswire and to comprehensive, targeted media lists that included both local and national media. Some additional tactics included:

The public relations efforts for the launch of Farmer’s Fridge garnered more than 2 billion impressions with a very limited budget.