By Paramount Public Relations on February 6, 2015 in Campaigns 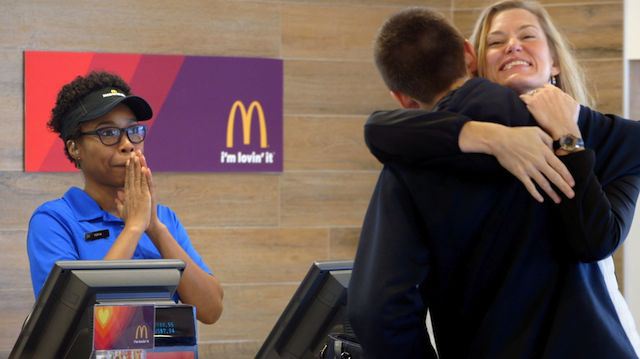 Recently, McDonalds’ launched its new campaign that focuses on “lovin.” This is a step in the right direction for the brand that has recently suffered multiple setbacks in the media, including criticism about its employee wages as well as speculation around the sourcing and nutritional value of its food. The new promotion known as “Pay With Lovin’” invites customers to pay for food with an act of love that is thought up by a McDonalds’ employee. While the campaign is only temporary, strong reactions both negative and positive are already trending.

This past Monday, hundreds of customers paid for their McDonalds meals with actions ranging from high-fives to taking selfies. An article on Business Insider highlights the many positive reactions posted by customers and McDonalds stores on Twitter, including photos of couples hugging or other acts of kindness. These photos promote a positive brand reaction and help foster a new, caring image for McDonalds service.

However, not all McDonalds customers were enthralled with the new promotion. In an article on Wall Street Journal, one customer was left feeling publicly embarrassed after being told to ask someone to dance. The authenticity of the feel-good stunt somewhere was lost in translation from the commercial that appears on the television commercial to her present reality.

Almost sixty years from its founding, McDonalds’ is trying to prove that they are listening to and taking into consideration its consumers changing values. Whether or not consumers like the performing the random acts of kindness, it raises the question— is McDonalds’ actually giving its customers what they want?